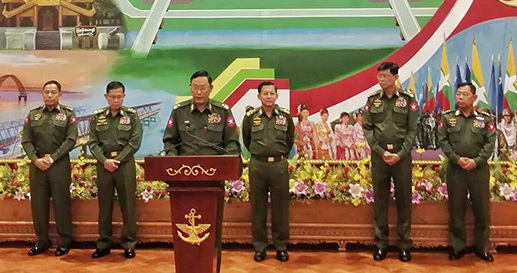 The Myanmar Military on Friday declared a unilateral four-month ceasefire in Kachin and Shan States, the northern and eastern regions of the country that been under military conflict for much of the country’s 70 years of independence from Britain. The move is the first truce ever initiated by the powerful military, which is known as the Tatmadaw, and is aimed at breathing life into a shaky peace process by enticing separatist ethnic armies to join talks with the central government, a key policy goal of national leader Aung San Suu Kyi. “The Tatmadaw (military) will cease all military operations in each command from Dec. 21 to April 30,” in order to allow negotiations with ethnic armed groups, according to the statement issued by the Office of the Commander-in-Chief on Friday, after Army chief Senior General Min Aung Hlaing met the Press Council. The order covers conflict zones in Kachin State and Shan State, where decades of conflict have displaced tens of thousands of residents. But it excludes the western state of Rakhine, where an army crackdown in 2017 forced some 720,000 persecuted Rohingya Muslims into Bangladesh and where the military has been engaged in fighting the Rakhine Buddhist Arakan Army. During the unilateral ceasefire period, the National Reconciliation and Peace Center (NRPC) would hold peace negotiations with the ethnic armies in their respective areas, with ceasefire-related issues on the agenda. “I see the military’s move as a generous approach to peace. It is very good,” Intunkha Naw San, a lower house member of parliament for Myitkyina, the capital of Kachin state, told RFA’s Myanmar Service. “As local people in conflict areas have been suffering for a long time, they will welcome the military’s statement. We hope the peace process will get smoother than before because of the government army’s attitude in this statement,” said Khun Maung Thaung, Chairman of Ethnic Affairs and Internal Peace Committee. Cautious welcome in north The truce received a cautious welcome from the armed ethnic groups, many of which have long called for the military to take such a step and resisted the army’s demands that they lay down their weapons first. “Most groups in southern Shan State are NCA groups. Now, military released a ceasefire statement for the north and we welcome it,” said Khun Myint Tun, chairman of the Pa-O National Liberation Organization (PNLO.) The nationwide cease-fire accord (NCA) of October 2015 was signed by 10 ethnic rebel groups, but several others have held out, while some have expressed interest in talks. “We welcome the military’s statement as a good step, but we see it is still difficult to have peace. It means military will halt fighting in some places, but will keep fighting in the other places,” said Ta Phone Kyaw, general secretary of the Taaung National Liberation Army (TNLA), one of the ethnic armed groups that has been fighting the military in Shan State and has not signed the NCA. “We still have a lot to discuss. The statement also said the military will talk with ethnic armed groups and we want to talk with it as soon as possible,” he added. “We now know government army’s attitude and we welcome it. It is a very good step for the peace process,” said Rev. Dr. Hkalam Sam Sun, General Secretary of the Kachin Baptist Convention (KBC). “If government troops are truly withdrawn instead of just releasing a statement, we will see a brighter way to peace,” he added, noting that the Kachins want to discuss the return to their villages of internally displaced persons scattered across the region be recent rounds of fighting. Rakhines excluded and wary Ethnic Rakhine leaders, whose armed group remains outside the peace process and excluded from Friday’s declared ceasefire, remain wary about the army’s intentions, suggesting the Tatmadaw was making a tactical move while it faced international criticism for the Rohingya crisis and fights on numerous fronts. “It is hard to say the military is stepping back,” Tun Zaw, general secretary of the Arakan National Council (ANC). “When we have international pressure and more fighting areas not only in the north, but also in the west, it might be difficult for the government army to conduct military operations on all fronts,” he told RFA. “It is as if the military is trying to reduce the fighting fronts during this period,” Tun Zaw. Zaw Htay, the government spokesman, noted that the Arakan Army was now fighting the national army and “the Rakhine situation is very complicated and we all have to be very careful.” “Rakhine ethnics also should think about it. They said they want equality and self-determination. If so, they have to move forward by way of the NCA,” he said, referring to the peace process. The ceasefire was announced on the same day that European Union said it will slap asset freezes and travel bans on seven more army and border police officials “for serious human rights violations committed against the Rohingya population, ethnic minority villagers or civilians.” The latest move brings to 14 the total number of people in Myanmar under EU sanctions for abuses stemming from a violent crackdown in August 2017 on Rohingya Muslims by security forces that drove more than 725,000 members of the minority group to Bangladesh. A previous crackdown in northern Rakhine in October 2016 forced out more than 90,000 Rohingya. An extensive report issued in September by United Nations investigators detailed violence by Myanmar security forces and called for the prosecution of top military commanders on genocide charges at the International Criminal Court or by another criminal tribunal. Reported by Win Ko Ko Lat, Wai Mar Tun and Kyaw Thu for RFA’s Myanmar Service. Translated by Khet Mar. Written in English by Paul Eckert.