Skip to content
mewashingtondcHome » » “Myanmar-United States relationship reached to a higher level with the visits of the Presidents of two countries recenty.” said Ambassador U Aung Lynn at a reception on 18 January 2017 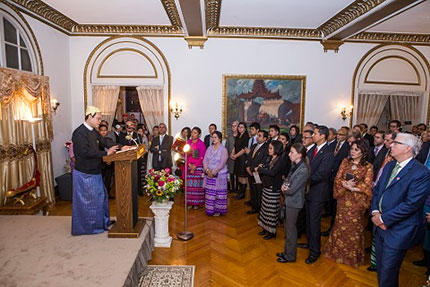 The Myanmar-US relationship reached to a higher level with the visits of the Presidents of two countries. President Obama became the first US President to visit Myanmar in November 2012 and he paid a second visit to our country in November 2014 to attend the ASEAN US meeting. President U Thein Sein visited the United States in May 2013.

The most significant visit to the United States recently was the visit of the State Counsellor Daw Aung San Suu Kyi in September last year. She was the guest of the US government and represented the first civilian government formed in more than fifty years. The State Counsellor had fruitful meetings with President Obama and other high officials and law makers and also with the US business community and the think tank groups during her visit.

The results of the visit, the United States government lifted all economic sanctions imposed on Myanmar. ………. Today we see US government and non government organisations working with Myanmar citizen for economic and social development.

Following the easing of US import ban, Myanmar exports to the United States jumped from zero to $226.9 million in 2016. The opening of a U.S. Commercial Services office in Myanmar will greatly promote U.S. investment in Myanmar.

[Excerpts from the speech delivered at the 69th Myanmar Independence day reception held at the Embassy of Myanmar, Washington, DC on 18 January, 2017]

Memorandum for the establishment of External Affairs Department
17 March 1947

Myanmar embassy will be closed on these dates